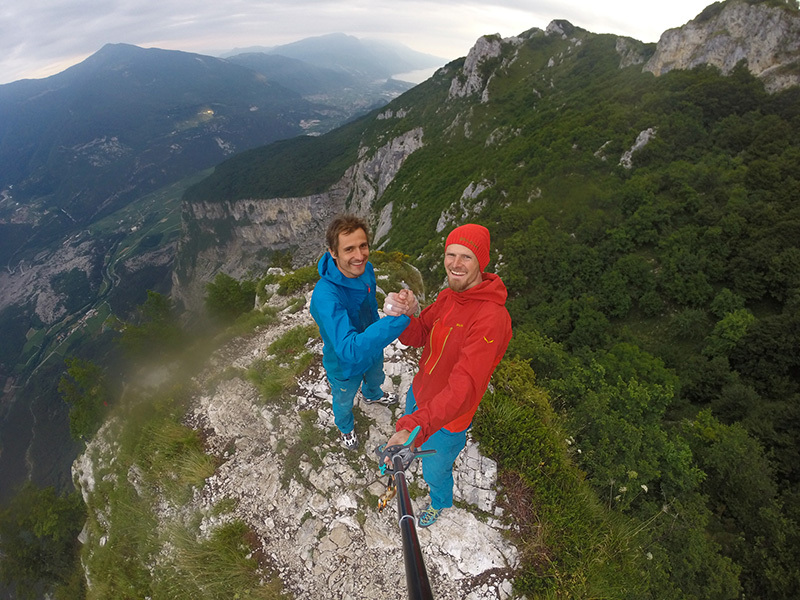 Nearly a month ago, Jacek Matuszek and Łukasz Dudek paid their first visit to Valle del Sarca, Italy in order to make a reconnaissance of a route being one of the biggest multipitch challenges in the Alps. Climbing the massive roof on the east face of Monte Brento, Brento Centro is the only free climbed route on the face. The first ascent was made by David Lama and Jorg Verhoeven, whose almost three-year struggle with the line often resembled a true climbing nightmare. Afterwards, the team reported on exposed climbing on chossy and loose rock as well as abseiling problems. Whether it was because of the Austrian and Dutchman’s determination to complete the project or the electrifying magnitude of rock full of roofs, the team managed to free climb the route in 2010 and since then, no one has dared to follow them… until now.

Lukasz Dudek and Jacek Matuszek started working the route out at the beginning of June. Back then, the team managed to pull up the portaledge under the main roof located after the 19th pitch, as well as aid climbed the route, gaining the first impression of its 27 pitches. Brento Centro is a culmination of difficulty: 22 pitches are graded 7a or more, out of which the last three offer 8a+ difficulties and are often bouldery in character.

“The first seven pitches climb grey III-IV slabs and after 400 meters one reaches the proper part of the route. That was where we had to stop for a moment – the fact that Jacek couldn’t find any solid holds to begin with made us think. We took a look at our topo and we noticed that there were places marked as ‘extremely loose rock’ but the pitch in front of us wasn’t one of them. Additionally, we started recalling David Lama’s words that the higher they got with Jorg the worse the quality of rock was. It all made us stop and consider our options, we were not sure whether we wanted to climb any further. But we did. A few pitches higher we got the first opportunity to tackle the extremely scary terrain. Seeing the rock in front us, there was only one word that came to our minds: madness. Most of the holds we grabbed remained in our hands and only some of them were solid enough. We could only hope they would withstand another attempt. The pitch no. 15 graded 8a is quite funny though: one has to traverse using a good ledge for feet and chossy holds. We tried to weigh them down carefully, simultaneously pushing them to the wall. The next 7c pitch starts with a crack with rusted pitons and then there’s another long traverse. Once you’ve climbed this section, the abseil is very problematic if not impossible. Then, there are only two continuous 7c pitches left to the portaledge”, said Jacek and Lukasz after their first visit on Monte Brento.

From that point on the wall, the team has to climb only eight more pitches to reach the summit, all of them quite demanding, including bouldery sequences, continuous endurance climbing in a horizontal crack, traversing, roofs, dihedrals, slabs and extremely loose rocks often with long runouts. After three weeks of physical and mental recovery, on the 28th of June 2015, at 5.00 am, Lukasz and Jacek set off to make another attempt on Brento Centro, not without scary surprises:

“We wanted to climb the first 400 meters calm and focused but we got annoyed already around 09:00 when the sun started shining directly on the wall. The scorching heat and no wind were sucking out our energy minute after minute. I was belaying Jacek and managed to stop thinking about the conditions for a moment when suddenly, one of the ledges above me broke off and I saw it falling in my direction. I held on to the wall, narrowly escaping the impact and hearing the blocks falling right next to me”, reported Lukasz.

The team reached the proper part of the route around noon and one hour later they were accompanied by the long-awaited shade, giving relief to both body and mind that had been continuously put to the test by the poor quality of rock.

“Everything was going well. We were climbing fast, focused but stressed out with the continuing uncertainty over the durability of the holds. We reached the portaledge without falling off at 8.30 pm. The following day we woke up tired and could not pull ourselves together for quite a long time. We set off at 10.30. For his breakfast, Jacek had to tackle the 8b pitch. He warmed up trying the initial boulder and sent the line on his second go. It all got tough on the following 8a+ pitch climbing the dihedral, which was literally falling apart, and ending with a powerful boulder. It took me two tries to send it. We made the next three pitches on our first attempts but often on the verge of falling off. The last three 8a+’s, being simultaneously the last pitches of the route, are crucial. We quickly worked out the optimal beta for the first one and, surprisingly, sent it quite easily.”

The team managed to work out the last two pitches during their first trip, which appeared to be crucial for the final success as it enabled them to confidently climb their way to the last stance and on June 29, at 7.20 pm, tired but extremely happy, they reached the top.

Lukasz and Jacek do not even consider resting on their laurels. Their next multipitch goals for this season within the framework of the Alpine Wall Tour project are Panaroma (8c, 500 m), one of the three most difficult and most spectacular multipitch routes in the world, and Silbergeier (X+, 200 m), the final stretch of the team’s road to completing the Alpine Trilogy. 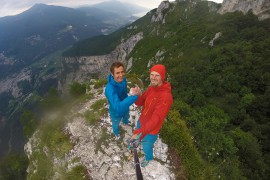