La Sportiva, producer of the world’s finest mountain products for over 80 years, proudly announces that the trail runner Anton Krupicka is now part of the global La Sportiva Ambassador Team

Known for leading the Leadville 100 Trail race, for the big win in Lavaredo Ultra Trail 2014 and many other ultra endurance challenges, Anton Krupicka rejoins the La Sportiva Mountain Running team to further pursue his passion for difficult challenges in the mountains. Anton is looking to move into bigger mountain objectives and to combine his passion for trail running, climbing, and skiing to create some epic speed linkups in the coming seasons.

“Anton is a true mountain athlete and we’re pleased to welcome him back to the La Sportiva family,” says Lorenzo Delladio president of La Sportiva S.p.a. located in Italy. “He’s a natural fit with the La Sportiva program and will serve as the face of not only our Mountain Running footwear and apparel programs, but also represents La Sportiva’s commitment to moving quickly and efficiently through mountain terrain. We can’t wait to see what he accomplishes both in USA and in Europe: he is going to be for sure a true global ambassador for the brand highlighting what La Sportiva is doing in the trail running world producing high quality f ootwear and apparel for running on every kind of terrain and conditions.”

Anton has been running and racing since 1995. He ran his first marathon at 12, competed collegiately at Colorado College and there discovered the joy of long mountain endurance runs. He won his first Leadville 100 in 2006 and hasn’t looked back since, setting standards in elite trail racing and long distance mountain running wherever he goes, including winning the Leadville Trail 100 Run twice, owning the 50 mile Trail National Champion title in 2009 and 2010, finishing in 2nd place at the Western States 100 in 2010 and having the car-to-car Fastest Known Time on Gannett Peak in Wyoming (2012). Krupicka also won the Lavaredo Ultra Trail 120K in Italy in 2014.

“I’ve always admired the people and products that make up La Sportiva,” added Krupicka. “I’m delighted to come back to the team and pursue some ambitious challenges in the years ahead, including some FKT attempts that I’m still dreaming up. La Sportiva’s footwear and apparel is top notch and I’m excited to represent the brand in all that I do.“
Info on La Sportiva
La Sportiva was born in 1928 when Narciso Delladio hand-crafted wooden leather boots for many lumber-jacks and farmers of the Fassa and Fiemme valleys (Dolomites, Italy). After the war, the demand for boots increased obliging Narciso to hire new workers: the good name of “Calzoleria Sportiva” crossed the boarders of the valleys and with the second generation represented by Francesco Delladio, started to become a worldwide known brand. Starting from here the La Sportiva’s history continued to grow. Now the firm produces in Fiemme Valley boots and shoes for all kind of outdoor activities from climbing and mountain, categories in which La Sportiva has the market leadership, to mountain running, hiking and the skimountaineerging market. Recently the company entered in the skimountaineering segment and in the apparel market too with a complete selection of technical clothes for running, skimountaineering and climbing. La Sportiva who produces mainly in his headquarter at Ziano di Fiemme, is distributed in more then 70 countries worldwide. 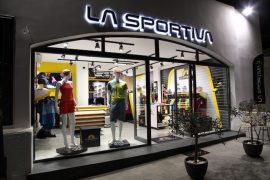