As anybody knows EN 958 norm is under revision and this creates lots of problems – let us try to clarify them. EN 958 norm at present valid expect the use for persons whose weight is between 50 and 80Kg with a sliding of maximum 120cm and an impact force below 6kN. On the base of indications given by VG11, the upper limit of 80Kg may be increased, under manufacturer request, to 90 – 100 – 120 – 140Kg.

To apply the new norm and get the relative certificate of conformity by a Notified Body, it is necessary to wait the approval by Formal Vote and the publication of the norm on the Official Bulletin in Bruxelles (after that, member states shall adopt that norm in their legislation within 6 months).

The publication of this norm is expected by the first months of 2017, obviously if approved by Formal Vote.

Therefore at present only via ferrata sets conform to EN 958 presently valid, may be sold with the relative certificate of conformity.

No Notified Body shall issue a certificate of conformity on the base of future norm EN 958 until the same will not be published.

Notified Bodies may carry on tests granting the conformity to the new norm, but without issuing a certificate of conformity: therefore via ferrata set conform to the new norm shall not be sold.

As a personal opinion, I think that the present norm (expecting a minimum of 50Kg and a maximum of 80 – 100 – 120Kg, in accord with manufacturer’s request) covers the great majority of users granting a sliding of only 120cm instead of 220cm expected by the modified norm.

We point out that the present via ferrata sets may be legally manufactured and sold until the expiration of the relative certificate (certificates have a validity of 5 years from the issuing date).

In conclusion, at present only via ferrata sets conform to present norm may be sold, while to sell those conform to the new norm it is necessary to wait the publication on the Official Bulletin – expected by the first months of 2017 (but that could be delayed) obviously provide the Formal Vote is positive. 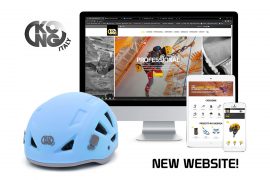 Kong and Alp Design, a synergy for the growth of Made in Italy