Ferrino is supporting a scientific and photographic project on climate change.

“Observing the changes in the glaciers won’t stop them from melting, but it is an important way to raise awareness among the population for a
subject that doesn’t always get the attention it deserves.”

Recording the changes in the planet’s most important glacial masses over the last 100 years, to show the effects of climate change. This is the aim of “Sulle tracce dei ghiacciai”, a scientific and photographic project promoted by Fabiano Ventura and the MacroMicro association, with the technical support of several organisations and companies, including Ferrino.

Almost 10 years on from the first expedition, which set out in 2009, this project, using the “repeat photography” technique – comparisons of historic and modern photographs taken in the same spot – has measured the state of the world’s most important glaciers, arriving in the Himalayas in 2018.

Here, during a stay of almost 2 months, the team has followed in the footsteps of Vittorio Sella and Douglas William Freshfield to Nepal, who in 1899
journeyed round Kangchenjunga, recording the geographical areas for the first time. They have also followed the routes of the British expeditions in Tibet, under the North faces of Everest and Cho Oyu between 1921 and 1938.

The Himalayan expedition is the fifth in this project, which has lasted over a decade. It was the idea of Fabiano Ventura, landscape photographer and advisor, working alongside various scientific institutes, including the Department of Earth Sciences of the University of Milan, which has led to research into the mass balance of the glaciers visited during the expeditions.

From this year, the team of “On the trail of the glaciers” is travelling with technical expedition equipment and apparel by Ferrino. The project is in line with the values of caring for the environment that are a part of the Ferrino ethos, since the company culture involves believing in the essential nature of raising awareness with the population when it comes to this area, which is often overlooked at global level. 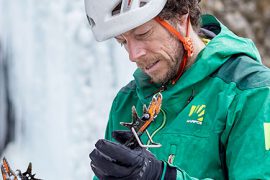