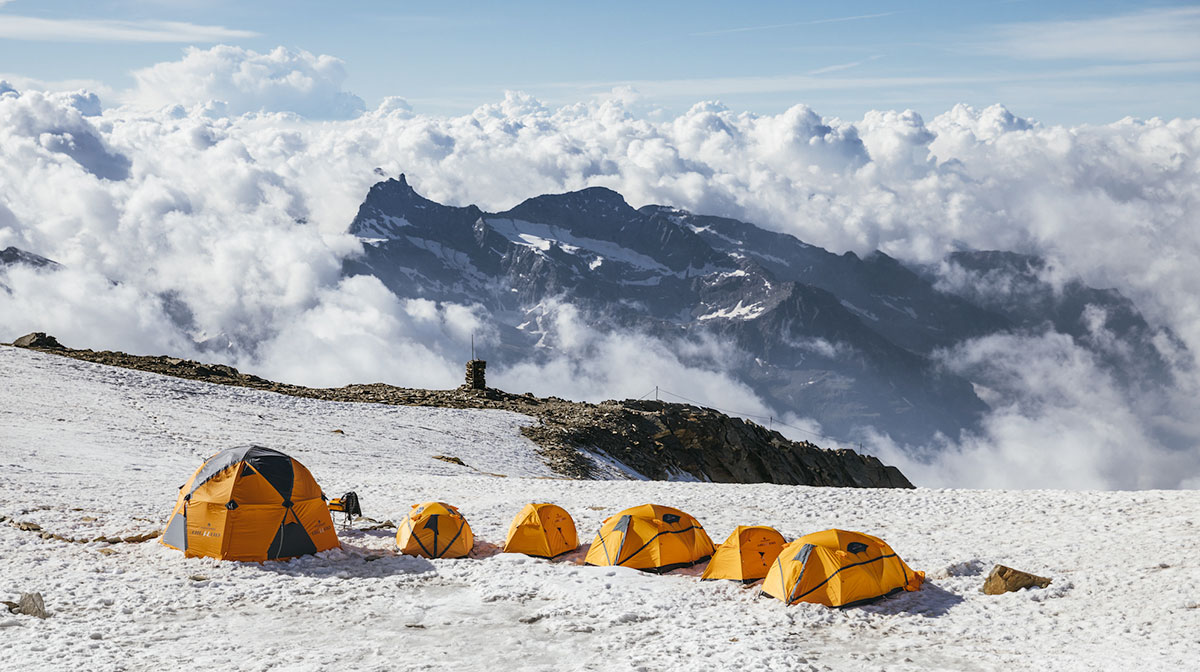 Ferrino Base Camp: a night in a tent beneath the stars! Live the beatable experience on the Alps, spending a night in tent at high altitude.

The project “Ferrino Base Camp” is expanding with new test camps distributed on the Alpine region, located at different altitudes in order to gather important feedbacks from consumers about products. Beside the historical Ferrino HighLab Base Camp at the Quintino Sella Refuge on the Monte Rosa, this summer we will have two other camps in the area of Cuneo: the Quintino Sella Refuge, on the Monviso, and the Toesca Refuge; and on other spot in the Friuli region: the Celso Gilberti Refuge.

This project was born in 1994 with the creation of a permanent investigation laboratory on the Monte Rosa at the Quintino Sella al Felik Refuge (3.585m), based on the idea that the mountaineer experience is essential for the development of high quality products. The result of this experience is a product range in line with the highest operational and qualitative standards, which guarantees high performances in every climatic conditions.

Testing Ferrino’s products while sleeping in tents at high altitude is a unique opportunity, something to try in complete safety: the base camp, in fact, is prepared by mountain professionals, located alongside a refuge placed in an alpine environment. An unbeatable experience both for those who are protagonist and for those who gather the results, transforming the opinions of a varied and enthusiastic audience in always

more high-performance products. For these reasons we developed the test camp concept, that every year widens its horizons, involving new refuges and more and more mountain and mountaineering enthusiasts.

Where are the Ferrino Base Camp located? 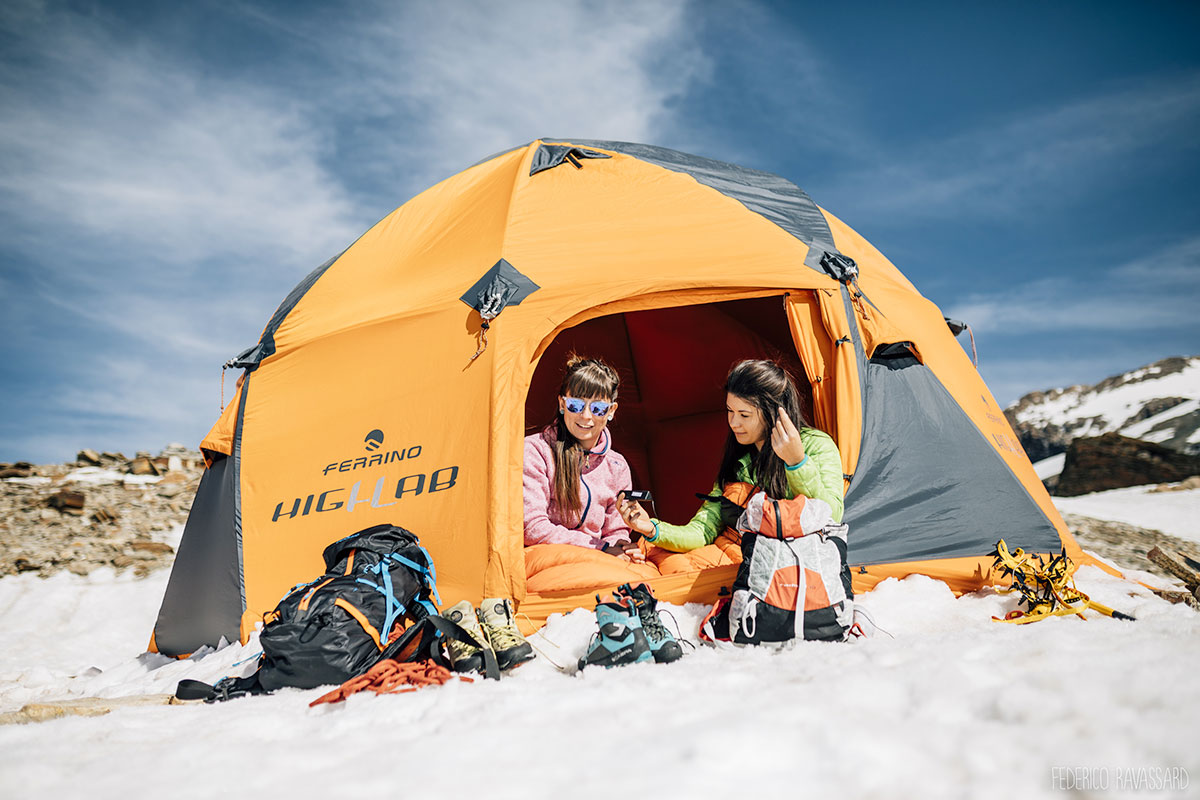 The Ferrino HighLab camp at the Quintino Sella al Felik Refuge, operating in July and August, is located on the Italian side of the Monte Rosa

The HighLab camp at the Quintino Sella al Felik Refuge, operating in July and August, is located on the Italian side of the Monte Rosa and it represents the starting point for ascending famous peaks over 4 thousand metres, including Castore and the West and East peaks of Lyskamm.
The refuge is reached on a tooled route, requiring 3 or 4 hours’ walk for averagely fit climbers.
www.rifugioquintinosella.com | info@rifugioquintinosella.com |Telefono: +39 0125 366113 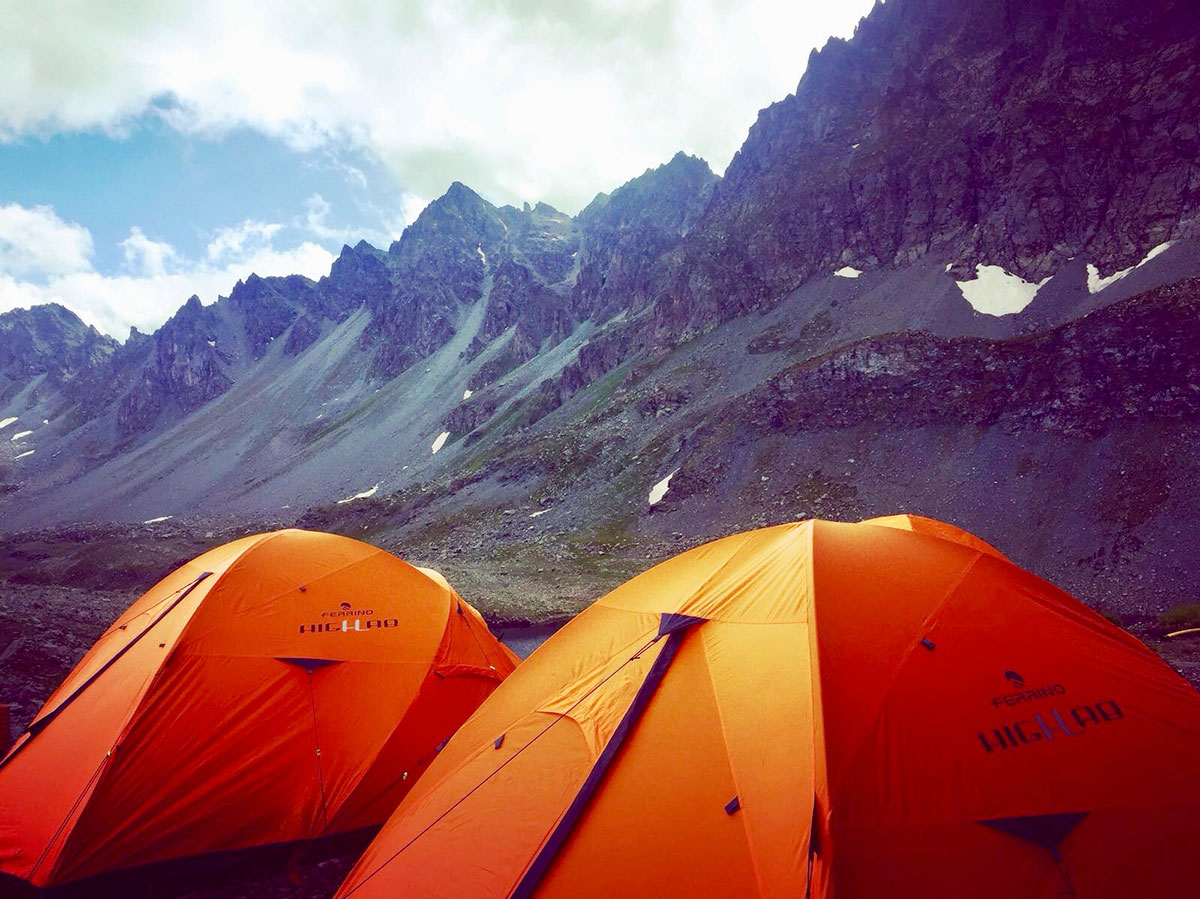 The Ferrino HighLab Base Camp located in a breath-taking setting, in a basin under the east side of the Monviso.

The Refuge is located ina breath-taking setting, in a basin under the east side of the Monviso. Built in 1905 on a rocky promontory above the Lago Grande di Viso, it hosts the Ferrino HighLab Base Camp in July, August and September.
www.rifugiosella.it | info@rifugiosella.it | Telefono: +39 0175 94943 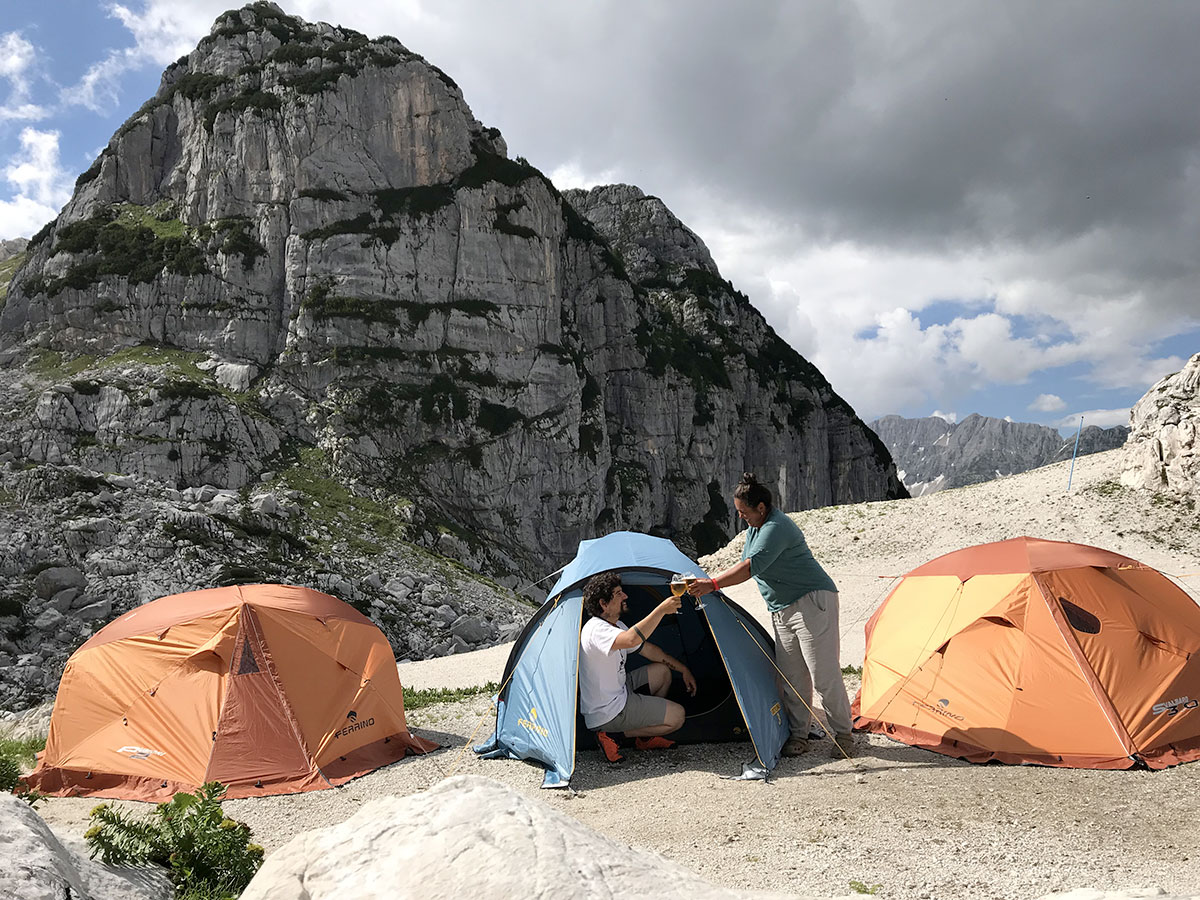 Located into the heart of the Julian Alps at the slopes of the Kanin Mountain, the Refuge is reachable starting from Sella Nevea, in the municipality of Chiusaforte (UD).
www.facebook.com/irenepittino/ | Telefono: 0433 54015 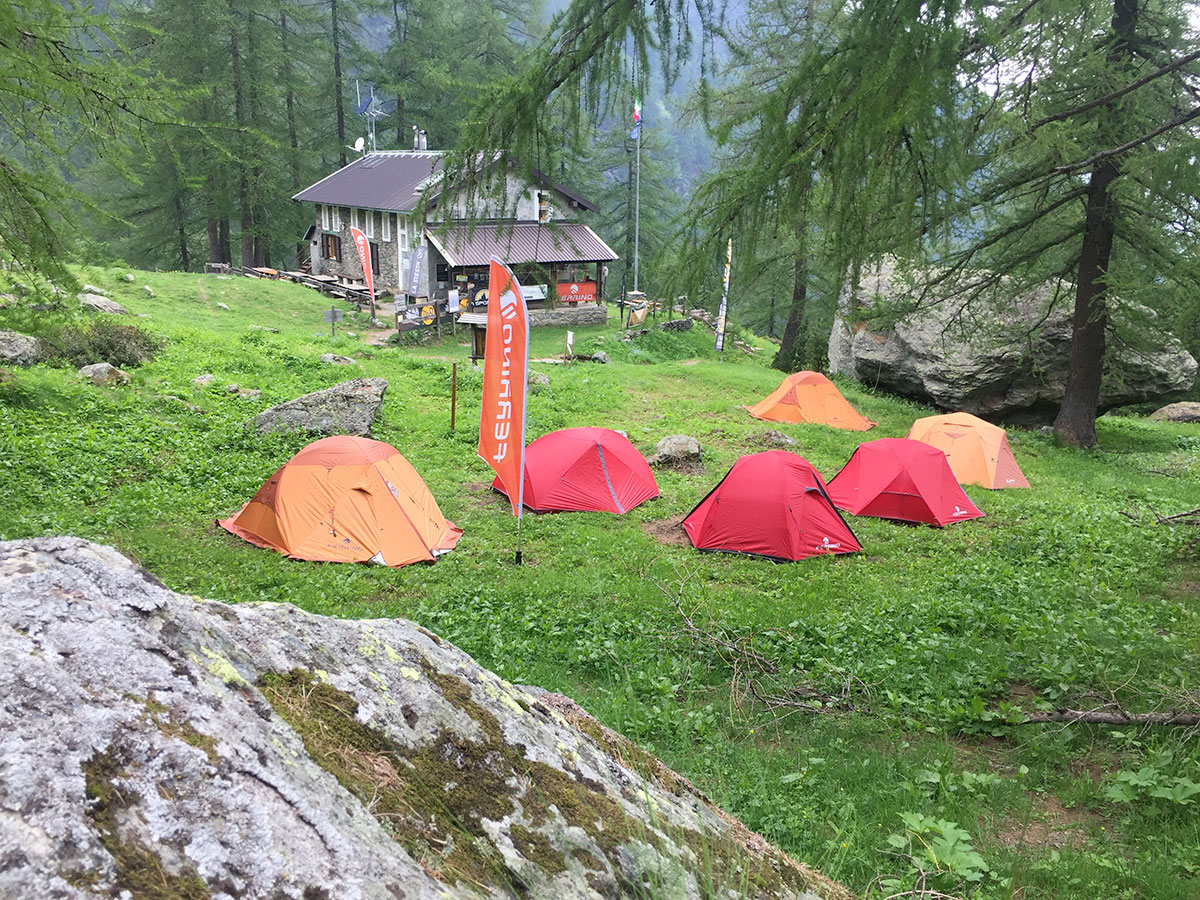 The Ferrino HighLab Base Camp at Rifugio Toesca in Val Susa

The Ferrino Camp at the Toesca Refuge it’s both summer and winter. It’s located in the Val di Susa, in Piedmont, in the municipality of San Giorgio. Ascent to the refuge is open to all, on easy trails through the wood. Unlike in the other camps, here it’s possible to test also backpacks and trekking stick of the last Ferrino collection.
www.rifugiotoesca.com | rifugiotoesca@gmail.com | Telefono: 346 2247806

After spending the night in tent and testing the products, alpinist are asked to fill out a questionnaire. This will allow Ferrino to have a direct consumer feedback on the product and to collect important field test information that will be directly sent to the R&D department.
As highlighted by Anna Ferrino, CEO of Ferrino: “Our goal is to keep improving ourselves and offer products that are innovative and avant-garde as well as durable, high in quality, safe, easy to use and with big benefits for consumers. The information gathered from the test will give a great input also in the long term for the launch of new products. In addition, this practice give the possibility to the mountaineers to test the products before buying them.”

WHICH PRODUCTS CAN BE TESTED?
Our Camps presents many differencies between them for the type of environment, climate and altitude. Every Camp will make available several Ferrino products depending on the climatic conditions and the territory. At the Toesca Refuge Base Camp (1.710 m) it will be possible to test the Lightent model tent, while, for example, at the high altitude of the Quintino Sella al Felik you will find the Pilier 2 model or at the Quintino Sella on the Monviso there will be the 3 season tent Svalbard 3.0.

For more information on how to reach the refuges please visit the website: www.ferrino.it

To discover the history of Ferrino High Lab base Camp watch the video: 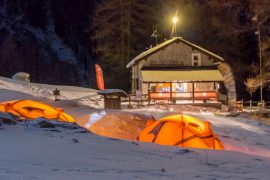 Sleeping in a tent on the snow? With Ferrino seeing is believing! Spend a night at high altitude outside Rifugio Toesca in Val Susa, Italy

Happiness project: the world tour with Ferrino to discover the secret to happiness