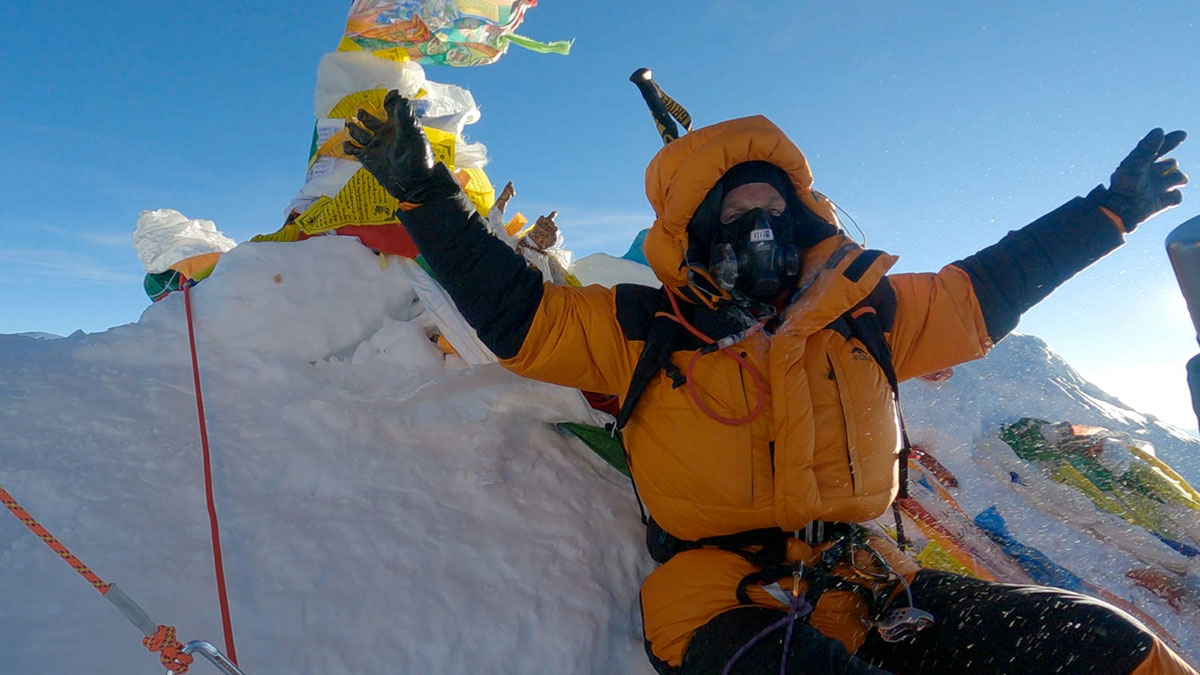 The Italian climber, who, in 2021, became one of Ferrino’s ambassadors, on 13 May fulfilled his life-long dream, by becoming the first athlete in the world with multiple amputations to climb the Everest

We followed all of Andrea’s steps toward the Roof of the World with trepidation. We rejoiced with him and his climbing partner – alpine guide Luca Montanari – when, on Friday 13 May, at 5:40 in the morning (local time), they were able to admire the sunrise from the highest point on Earth, at 8848 meters above the sea level. Then, we held our breath waiting to hear about their safe return to the Base Camp, after a long and difficult descent.

Now that this feat has finally ended in the best way possible, we too can celebrate and express all our pride for having contributed to their success, with our technical mountain equipment, born out of Ferrino’s passion and know-how. In particular, Andrea had the ultralight Instinct backpack, a Lhotse 4 tent for the Base Camp, a Dyneema Blizzard tent for the upper camps – which will be available in our FW22 collections from September. 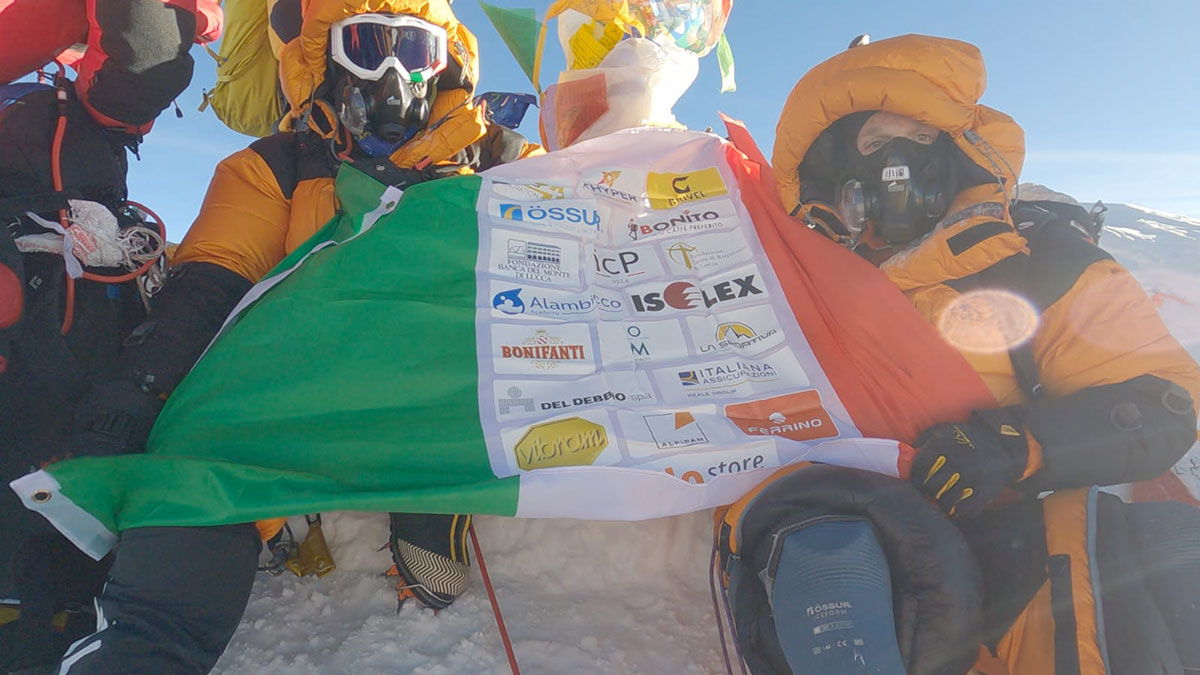 Andrea’s great climb started eight years ago, in 2015, when, due to acute meningitis, he suffered the amputation of both legs and seven fingers. Instead of being discouraged, this young athlete from Lucca tackled the uphill battle that led him to gain back his day-to-day normal life, and also to excel in Paralympic run races, and then chase his climbing dreams, with increasingly ambitious goals, until he reached the Top of the World.

Lanfri and Montanari climbed the Everest along the classic route, on the Southern side. After reaching Nepal in April, they completed their acclimatization, and Andrea even took this chance to wear his runner blades and run the highest mile in the world, in just 9 minutes and 48 seconds.

Early last week, Andrea – with the prosthetics especially designed for high-altitude climbing – climbed with his partner toward the upper camps, until they reached the South Col, at 7900 meters, where the final stretch toward the peak began.

The climb was not at all easy, and the struggles were abundant, especially at very high altitude, due to the extra-low temperatures and thin air. Andrea and Luca used supplemental oxygen on the last stretch toward the peak. 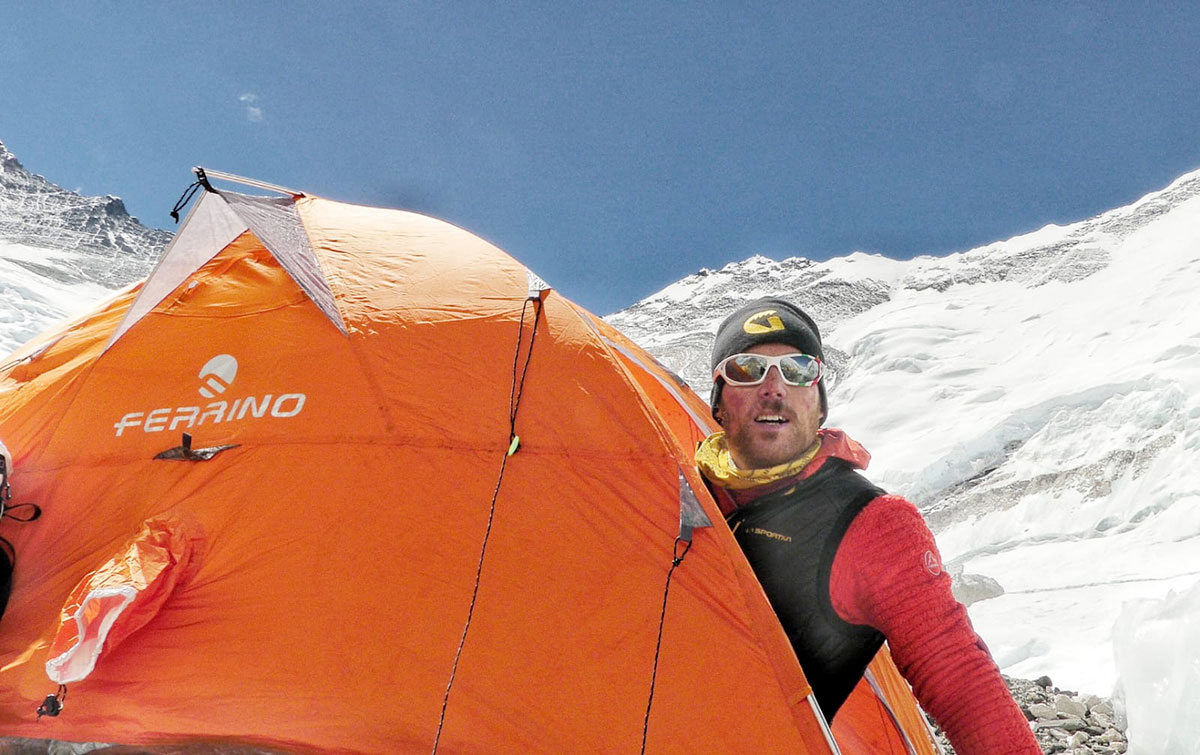 We called Andrea a few hours after he got back to the Base Field, to hear his impression and emotions “on the spot”.

Andrea, before you left, when you were asked how you imagined yourself on top of the Everest, you preferred not to answer, by saying that you wanted to tackle your challenge one step at a time. Now that you’ve truly reached the top, how was it to see the horizon from the highest place on Earth?
“An immense emotion, a journey, an image inside me I had been dreaming for years, and I was finally there, in a surreal mix, halfway between dream and reality. I never imagined in my entire life to be able to enjoy such beauty and happiness. “Where on earth am I?”, this was my question, inside me. Look where I got! If I hadn’t gotten back up after every fall on that trail above my house, I tried to walk on, when I moved my first steps with my prosthetics, I would have missed so much! All the struggles, the training, the people I’ve met along the journey, they all brought me to experience this joy. And I want to thank them, for this is a wonderful feeling!”

What was the most challenging part of the climb?
“The descent! After Hillary Step, I started feeling pain when I was walking on my right foot. And I thought: “I broke my foot… OK, no problem, I have another one with me!” The descent became increasingly hard, but, slowly, with the help of a few rappels, I managed to get back to Camp 4, very tired. And when I removed my shoes, I found out what the problem was: there was some ice between the carbon blades that prevented the foot from moving! Once I cleaned the foot from ice, even if the wind was very strong at the camp, I managed to sleep a few hours and recover some energy for next day’s descent. The following day, we climbed down from C4 to C2, where a nice bottle of Coca Cola was waiting for me in the tent! Then the last day of strain and dangers, when we crossed the Ice Fall and finally got to the Base Camp!”

Did you tackle the same struggles as any other climber, or did you have different challenges and obstacles on this climb?
“Besides the issues any climber has to face, I also have to be very careful to what happens to my residual limbs. If they become inflamed or sore, I cannot wear my prosthetics, and, at such altitudes, it definitely wouldn’t be a good thing… My experience, training and excellent sweat control have ensured that everything went in the right way, but wearing prosthetics sometimes can be painful, and it is always bothersome. You must clench your teeth and stay focused on your goal.”

How important was technological support in achieving your goal?
“The prosthetics’ technology is super important. However, if you don’t add a good chunk of willpower, technology alone won’t change your life! I still remember what my prosthetist told my, the first day I wore the prosthetics: “There are your new feet. Now carrying them around it’s on you!” And I got the feeling it wouldn’t be easy! However, soon enough I began having fun carrying my new carbon and titanium feet around… During a climb such as this one, even recovery movements are essential. To this end, having the support and safety of technical equipment, such as Ferrino tents, was paramount. And I don’t mean only protection against the wind and cold, but also against sunlight, which is truly blinding at such altitudes!”

The Everest’s peak was the final stop of a long journey. Did you see the next step of your walk between the mountains from up there?
“Yes, it is already scheduled! Actually, the Everest is only a stop along my journey – the most important one, obviously, but still a stop. The actual project – “my7summits” – will continue with other peaks. The next one on the line? Kilimanjaro, the highest mountain on the African continent!”

An ambitious project, and many new challenges to complete. And Ferrino will support them, with great enthusiasm: “We are especially happy about Andrea’s success, and proud to have an athlete like him among our ambassadors – explains our CEO Anna Ferrino – His story proves that there are no limits to passion and willpower, in the most transparent way. Helping achieving his dreams – and those of all the people who love mountains and nature – through our products, is our biggest satisfaction and the best acknowledgement of our work”. 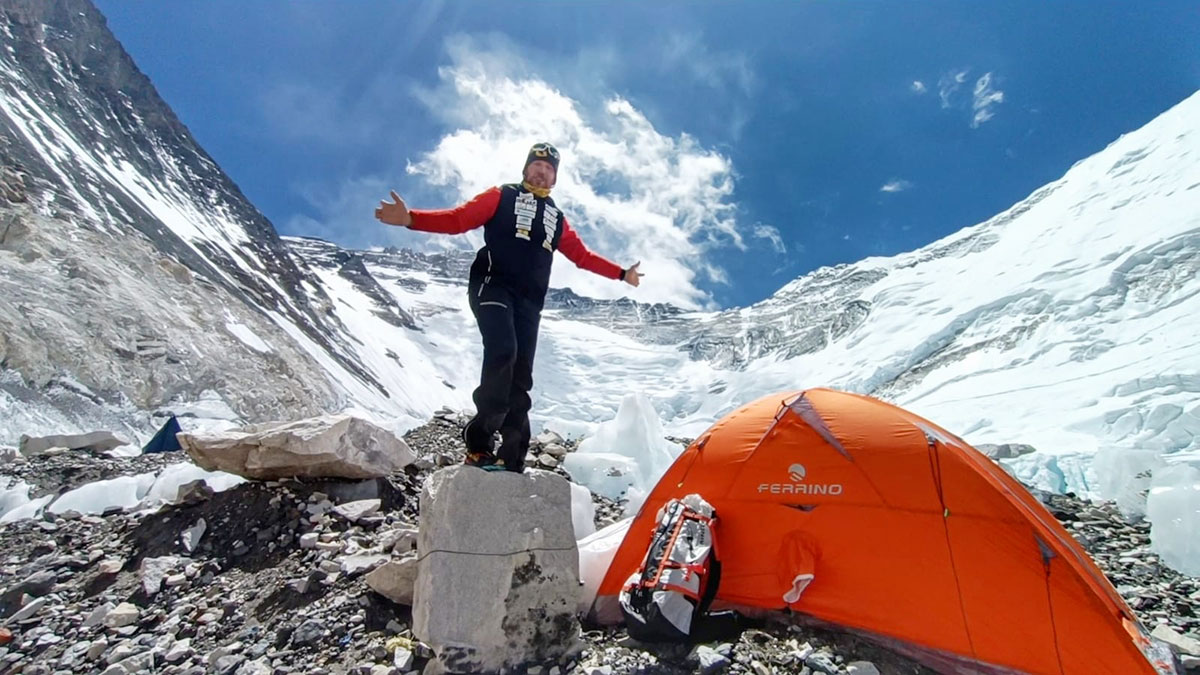 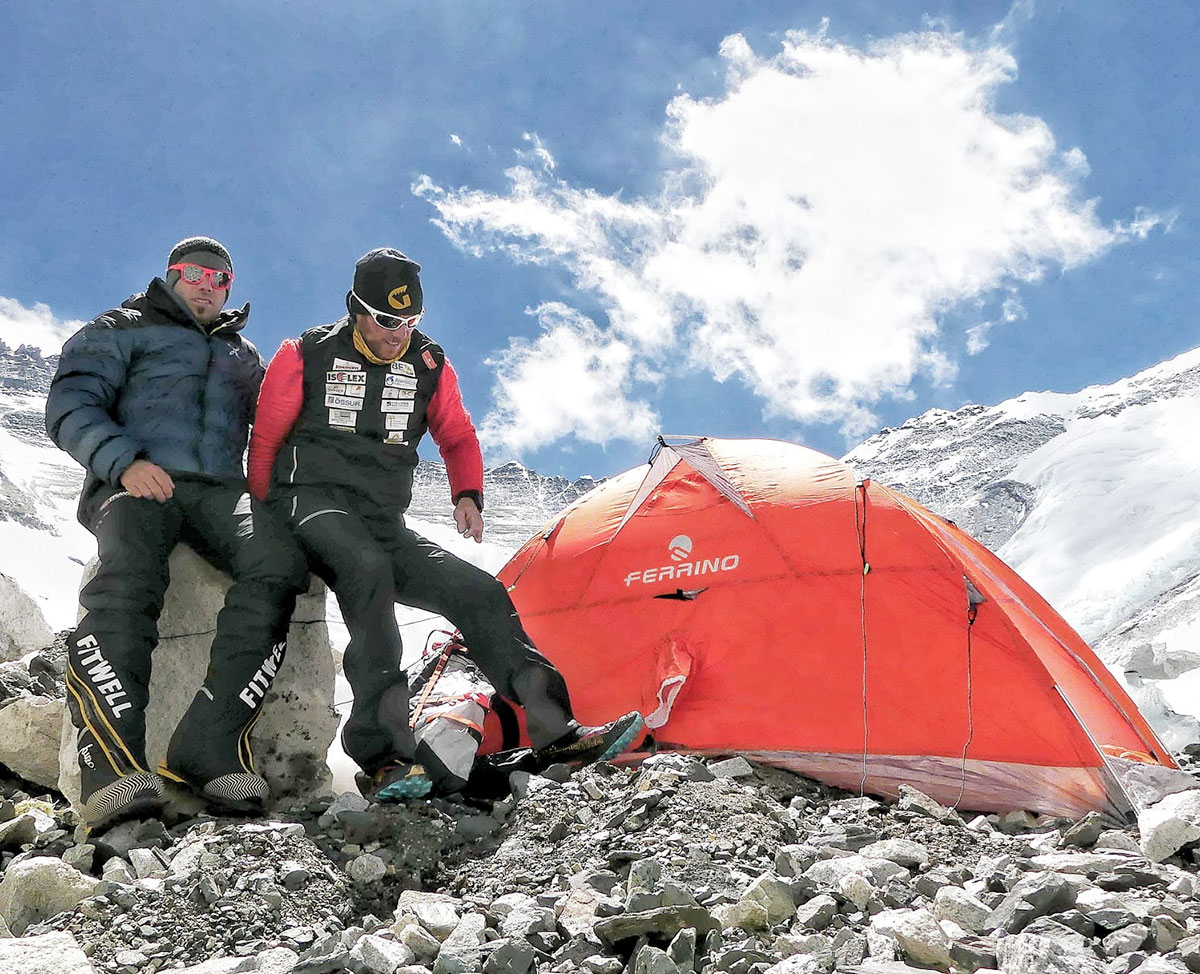 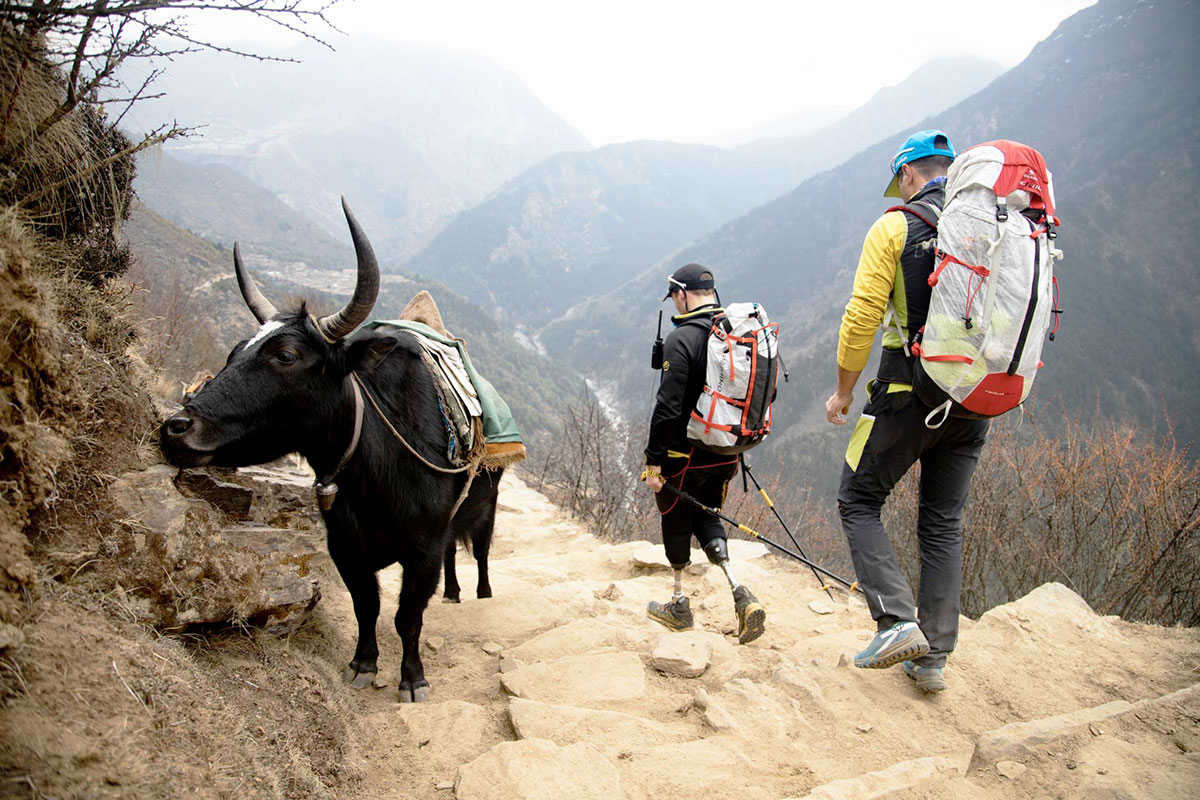 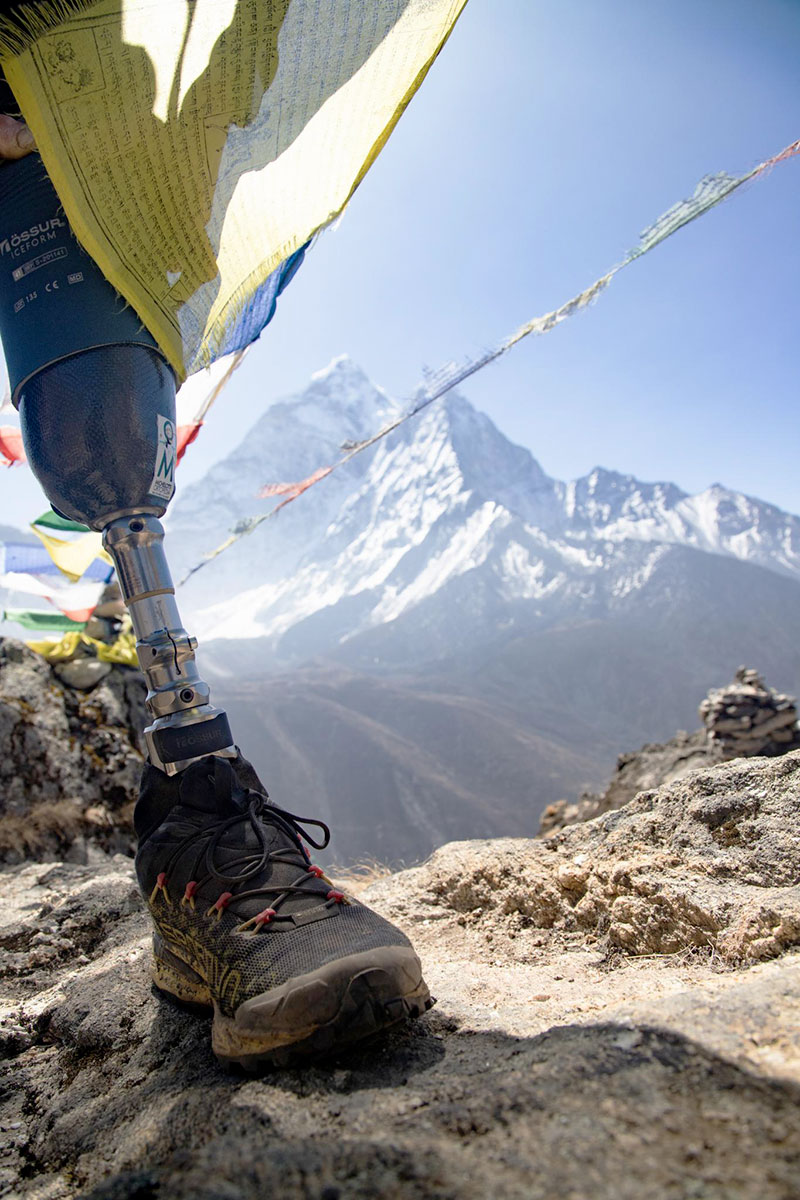