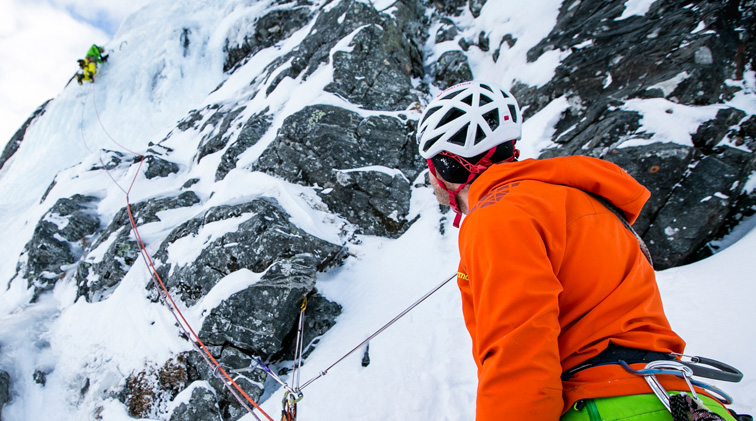 Marmot grew from 7 dealers in 1974 to 11 in 1977. Specialized, knowledgeable, trained retailers were always part of the original equation. Marmot has grown since 1977. It has 650 authorized Marmot dealers in the US and more than 800 dealers in Europe. Marmot distributes its products among 27 countries worldwide. Marmot is now headquartered in Santa Rosa, California. It now has further offices in Colorado, Canada and Hong Kong. Since the mid-1990ies, the European business became more and more important. In 2003, Marmot Mountain Europe GmbH was founded, it has its headquarter in Schnaittach/Germany. Six years later, the UK branch Marmot UK opened its doors.

However, the company has not changed that much in thirty six years. It is still all about the highest quality performance product. We are now, more than ever, seeking inspiration from professional mountain guides and athletes like Stefan Glowacz to develop products that are capable of withstanding all of the challenges that nature presents to us. Marmot is committed to an ecologically and socially sustainable approach. Our collections include more and more products that are made from recycled polyester, organic cotton and other environmentally friendly materials.

Marmot’s history
When Marmot first started, its aim was to produce the best outdoor clothing and equipment. In April 1971, University of California Santa Cruz students Eric Reynolds and Dave Huntley were in Alaska on the Juneau Icefields on a school project in Glaciology. It was here on the glacier, amongst these students, that the idea of a Marmot club began. To become a Marmot, you had to climb a glaciated peak with another Marmot.

That summer and through the semesters until 1973, Eric and Dave made prototypes of down products in their dorm room in Santa Cruz. Their first products were a down vest, a sweater and a parka and, later, three down sleeping bags. The warmest bag, the PIKA (now known as the Cwm) was rated at -45 degrees F. Eric did a winter ascent of the Grand Teton in Wyoming with Tom Boyce of Grand Junction, Colorado in 1973. Eric and Dave joined Tom in Colorado that next Spring. There, the threesome rented a 100 year old stone building near downtown, and opened a rental and retail shop under the name of Marmot Mountain Works. Thus, in the spring of 1974, Marmot the company was born.

That fall, Tom was climbing in Peru. There he met famed adventure filmmaker Mike Hoover. A few weeks after his return, Tom received a call from Mike. Mike explained he was calling on behalf of 20th Century Fox, was filming something called The Eiger Sanction with Clint Eastwood, and needed 108 very puffy jackets. Within only a week, the Marmots had designed the Golden Mantle, a very puffy jacket. Marmot was now in the movies. It also had its biggest order to date.

Eric met Joe Tanner of W.L. Gore & Assoc., Inc. in Elkton, Maryland in 1976. Eric was one of the first in the US to see a new concept in outdoor performance fabrication: GORE-TEX®. He was intrigued and, within a couple weeks, had sewn prototype sleeping bags in the new fabric for field testing. He and Dave proceeded to spend the next seven nights in a commercial frozen meat locker comparing bags with and without the GORE-TEX® fabric. Then they tested the bags sleeping under fire sprinklers. They liked what they saw.
The Marmot team immediately changed everything in the line to GORE-TEX® fabrications, including the down garments and all the sleeping bags. Marmot designed the first GORE-TEX® bivy sack. Marmot designed a GORE-TEX®, single fabric layer, mountaineering tent: the Taku. Marmot is the oldest customer of GORE in the world outdoor market.

In 1983, Marmot yet again set a new benchmark in extreme technical clothing with its Alpinist expedition jacket and, by doing so, simultaneously created a real classic that has continued to be extremely popular even today. In addition Marmot has always ceaselessly developed its own fabrics and materials, such as for example, its extremely high-performance, waterproof and breathable MemBrain®.

When Marmot first started, its aim was to produce the best outdoor clothing and equipment. In April 1971, University of California Santa Cruz students Eric Reynolds and Dave Huntley were in Alaska on the Juneau Icefields on a school project in Glaciology. It was here on the glacier, amongst these students, that the idea of a Marmot club began. To become a Marmot, you had to climb a glaciated peak with another Marmot.